In Nondual Wisdom, What Is Real and What Is Unreal?

For an easy-to-print Adobe Acrobat PDF version of this essay, click here.

So in this essay, I will cover what is an illusion, what is real, and what is unreal. I will also talk about why some people say that the world is relatively real and why they say that God (Source-Awareness) is Absolutely Real. So let’s jump in and see what we find.

An illusion is something that exists in a deceptive way

But just because the apparent motion of the sun is an illusion doesn’t mean we should say that this illusion is unreal. The illusion does indeed exist; this is why we can witness it. And here’s an important point: All good illusions are persistent.

By the way, I think it’s okay to talk from the perspective of the illusion. For example, it is fine to use the word “sunset” even though this implies that the sun is moving (setting). You are just speaking about the apparent motion of the sun and we all know what you mean. You don’t have to explain the whole story.

But notice how frequently people talk about an illusion and then later reveal that they think it is something that does not exist at all. This often happens when people talk about time. They might say something like “Time is an illusion,” and then a minute or two later, they will add “Well, since time does not exist, we shouldn’t worry about it” (or whatever). See the slip-up? That is not the correct understanding of an illusion. Usually I am pretty relaxed about how people speak but for this subject there are some important benefits in being more precise.

A similar thing happens when people talk about movies and dreams. You hear them say, “Oh, thank God it wasn’t real. It was just a dream!” Or “That was just a movie. It wasn’t real.” Of course we all know that the content of the movie is a fabricated fictional story. But the movie itself is certainly real. If the movie did not exist, we would not be able to watch it. This is why I think it is much better to say that a movie is real as a movie and that a dream is real as a dream.

Obviously with a movie there is a layer of pretending. If the movie is about a murder, the real police will not show up and arrest the actor since no one was actually killed. It was just an act of pretending and yet that act still exists as an act of pretending. And notice that even though this acting role really exists when the actor adopts it, it can be dropped at any time. All acting roles are nonessential to the existence of the actors and actresses but of course those roles are essential to the movie.

Notice that dreams and movies are both experientially real. In fact, this is the way that everything that has been created is real. We can experience a tree, a mountain, a thought, a dream, a movie and so forth. Now here’s an important point. While all of creation is experientially real, Source-Awareness cannot be experienced. It is completely imperceptible in every way. But this does not mean that it is not real. Let’s go into this a bit more.

Please let me start this section with some of my opinions and definitions.

God is Source-Awareness. God is not an object or a thing and cannot be perceived in any way whatsoever. This Awareness perceives but it cannot be perceived. God has two capacities: the capacity to perceive and the capacity to create what it perceives. Hence the term Source-Awareness. And this is what you are fundamentally. This is all you are fundamentally.

Source-Awareness is real (often stated as “Real”) and yet it cannot be experienced. But you don’t need to experience it directly in order to learn the truth about it. This wisdom comes about, not through observation and logic, but instead, through a spiritual, intuitive awakening.

All of creation is ever-changing and can only be known through experience, which is a relative process that involves the observer (formless Source-Awareness), the process of observing, and finally the object which is observed. This is why all of creation is said to be relatively real.

And yet God and creation are one Reality, not two. This is why this wisdom is said to be “nondual.”

The world can be said to be an illusion since it seems to exist all on its own. This is because the Creator is completely imperceptible. And yet if it were not for this unseen Creator permeating all of creation and giving it substance, creation would not exist. This is why you hear some Hindu teachers say that “the world as world is unreal” and yet “world as God (Brahman) is real.” If you think of the world as existing all on its own without God, you entertain a false idea. But if you think that God arises as the world while still transcending it, well then, now you have it.

Now, not only is all of creation an illusion, but the person you appear to be is also an illusion. Yes of course the person exists but it is not the separate, mortal, sentient, physical being that it appears to be. That is the false idea pointed to by our common daily experience. However, don’t overlook the fact that the person does indeed exist.

Your fundamental identity is the Actor, Source-Awareness, the one, uncreated, formless Divine Essence.

Your nonfundamental identity is the totality of created reality, the stage, the props and all the characters. This is what you are through the process of creation.

And your functional identity is the combination of the Actor and the one character (person) you appear to be. All of creation is thoroughly divine since God is not merely infinitely intimate with all of creation, God is creation.

I have essays on my website that go into all of this in more detail. Here are links to two of them:

The Loving Heart of Enlightenment
A summary overview of spiritual awakening in simple, clear English
3 pages

Take your time with this material. While it is not complicated, it is very different from the way things seem to be and it takes a while for it to sink in both cognitively and intuitively. In my opinion, it can take lifetimes for this wisdom to come alive within your soul in its deepest intuitive form. So no rush and no worries.

In truth, I honor your divine nature.

Thanks for visiting, Thomas Razzeto

My book is at Amazon 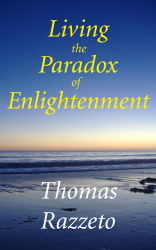